I have a rather mature system for organizing my photos because I have been photographing much longer than I’ve been shooting video. I never really had a desire to film before I had super cute kids running around. Combine cute kids with an amazing 1080p video camera in my pocket disguised as a phone, and all of a sudden I have a mountain of priceless videos that need organizing1.

My initial approach to organizing my movies was heavily influenced by my photography workflow. I imported everything into Final Cut Pro X and tagged the files with the people that were in them. I had four Events per year: Winter, Spring, Summer, and Fall. After a few months of doing this, I discovered a fundamental flaw in this system: I don’t ever edit my movies, I just watch them. It’s not that Final Cut isn’t a great application for editing and organizing video — it’s simply that I don’t have any desire to spend the time cutting together home movies. I simply want to be able to browse them chronologically.

First, I shoot! Lots and lots of videos of my kids. So much video that it can quickly consume all the available space on a 32GB iPhone2. I treat my phone like I do any other digital camera: it’s a temporary holding ground for new footage/images I have captured to be moved to a more appropriate and permanent home as soon as possible. I don’t keep every video or photo I’ve ever shot on my phone3.

The best tool to use for getting video (and pictures too) off of your phone is Image Capture. Image Capture is a wonderful utility that comes with OS X and makes quick work of transferring files from a camera or memory card. It’s only shortcoming is that there is no way to sort by media type. I find my videos simply my sorting by size in decending order. This puts the large movie files at the top. 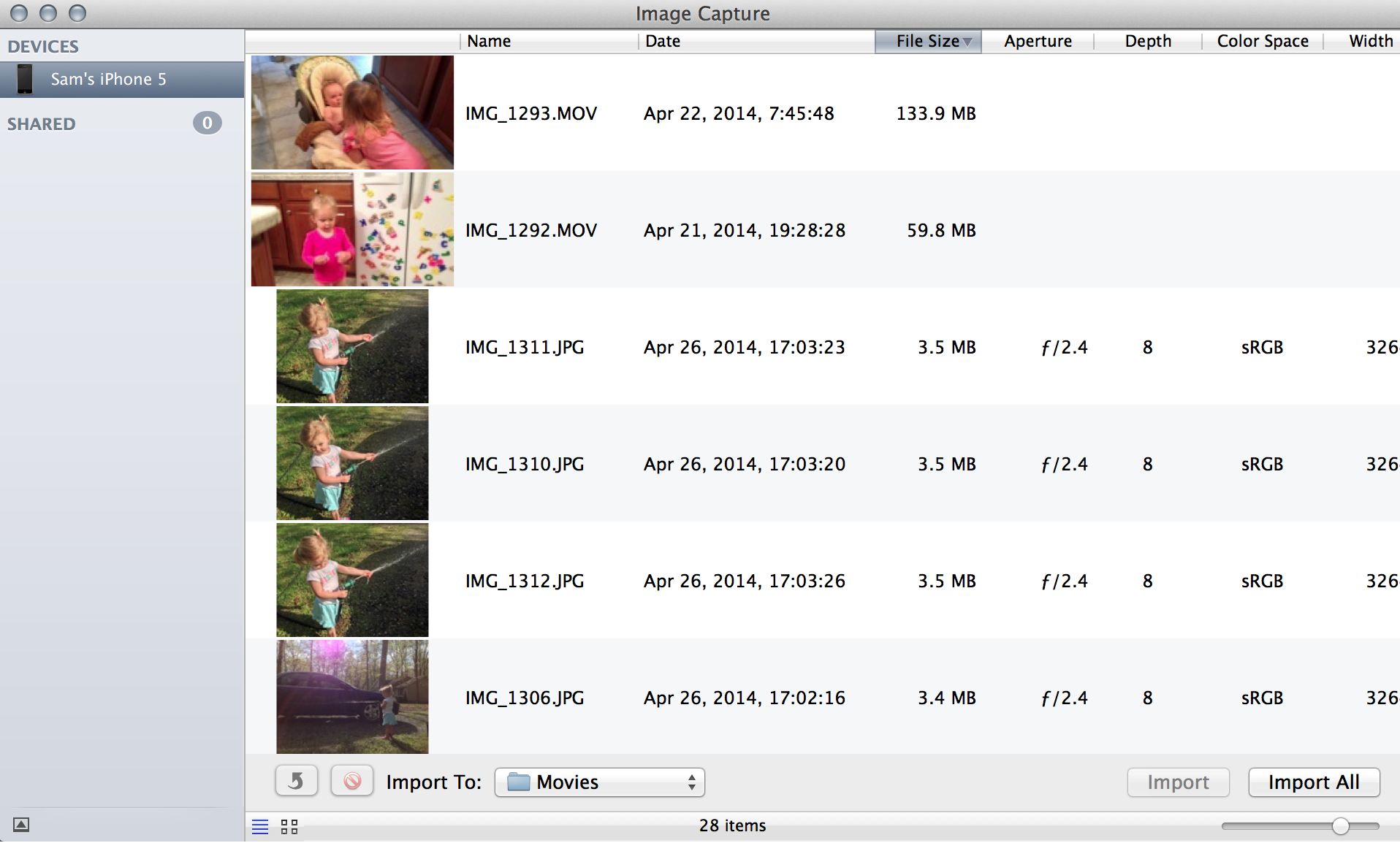 I select the movie files, then import them to a folder that Hazel is watching. Hazel is an amazingly powerful automation tool for OS X. Sorting movies is one very basic task I use it for. I have a rule assigned to the Movies folder that watches for Movie files, renames them to YYYYMMDD_HH-MM-SS.mov, then sorts them into folders by year and quarter4. 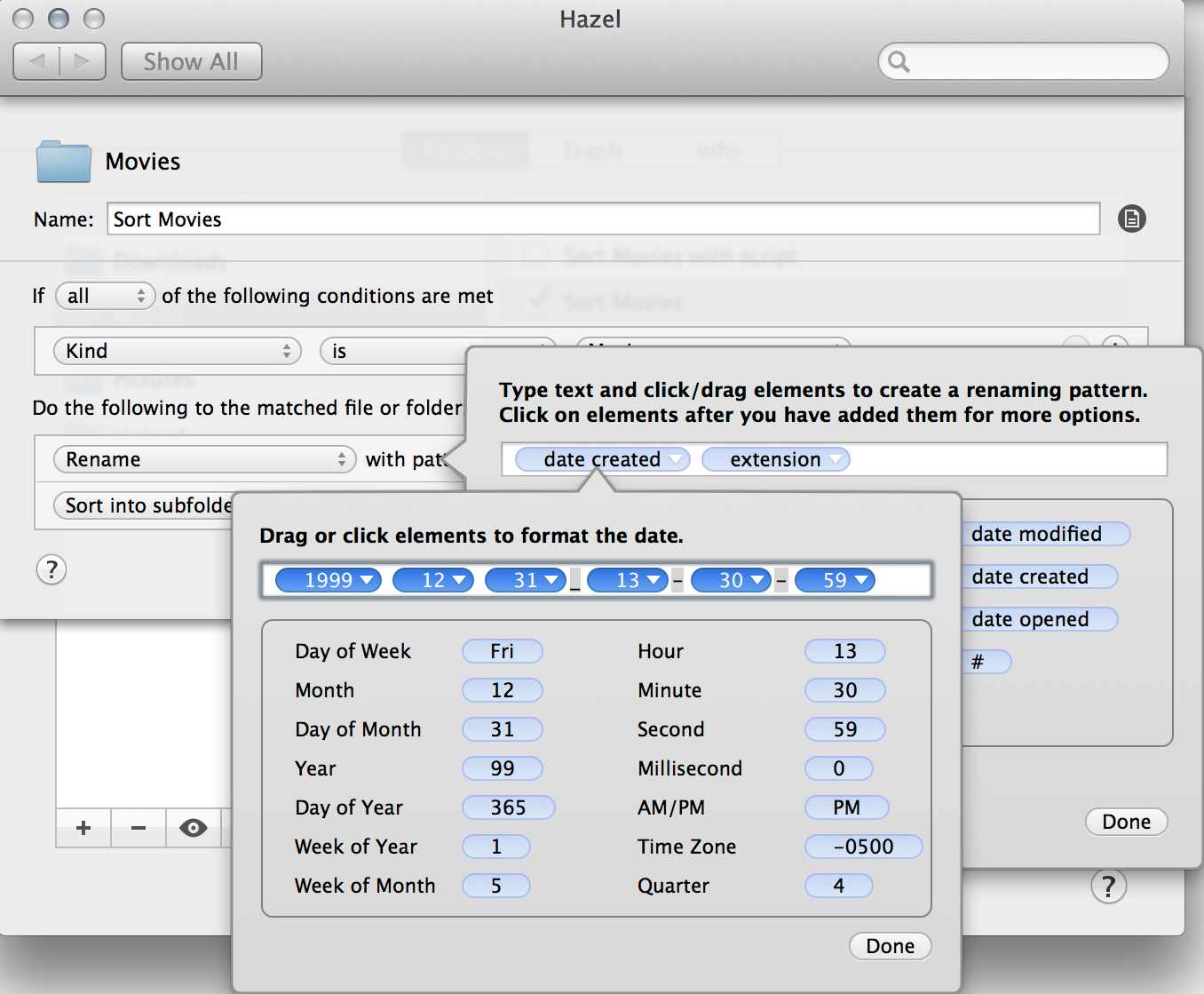 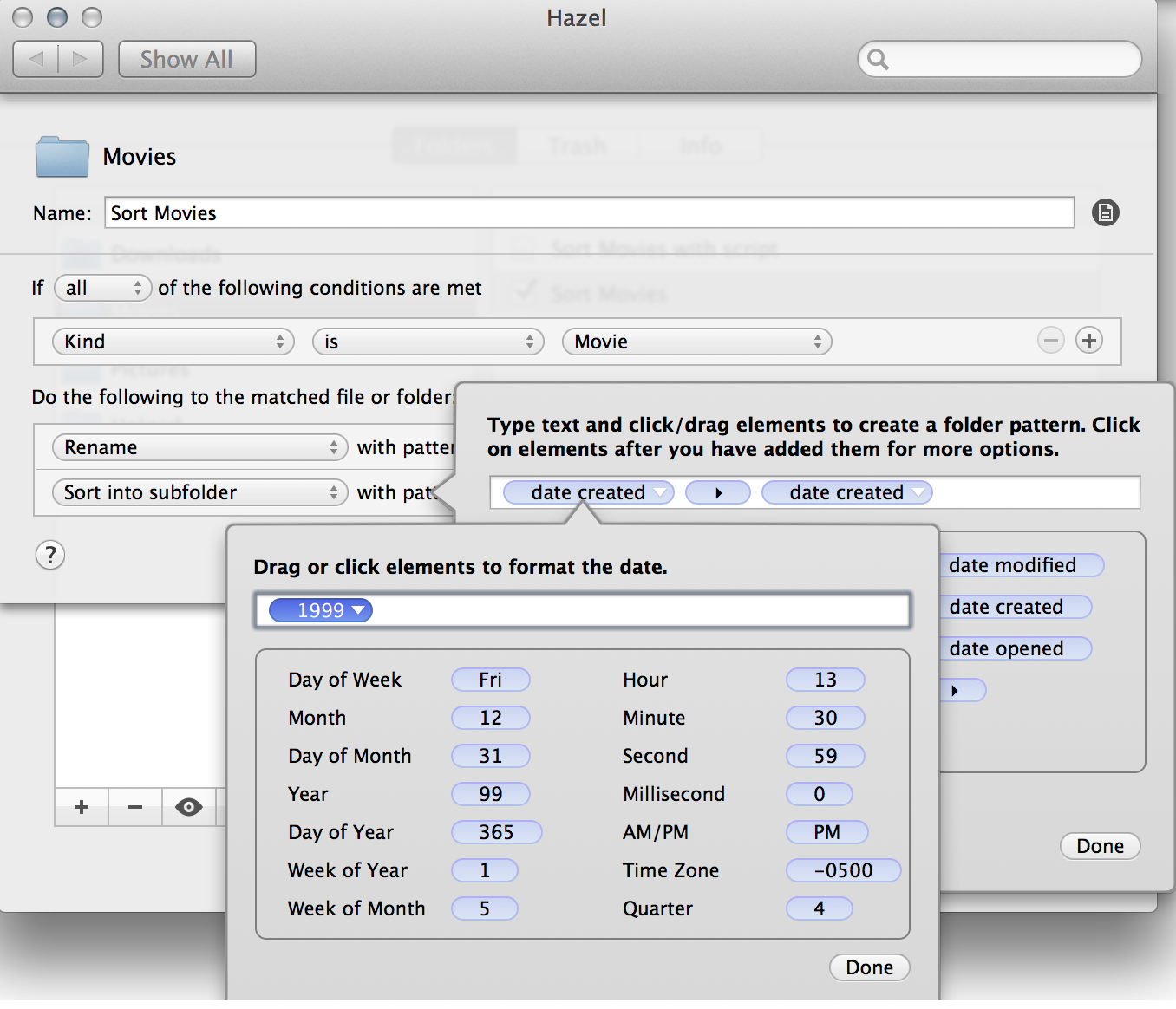 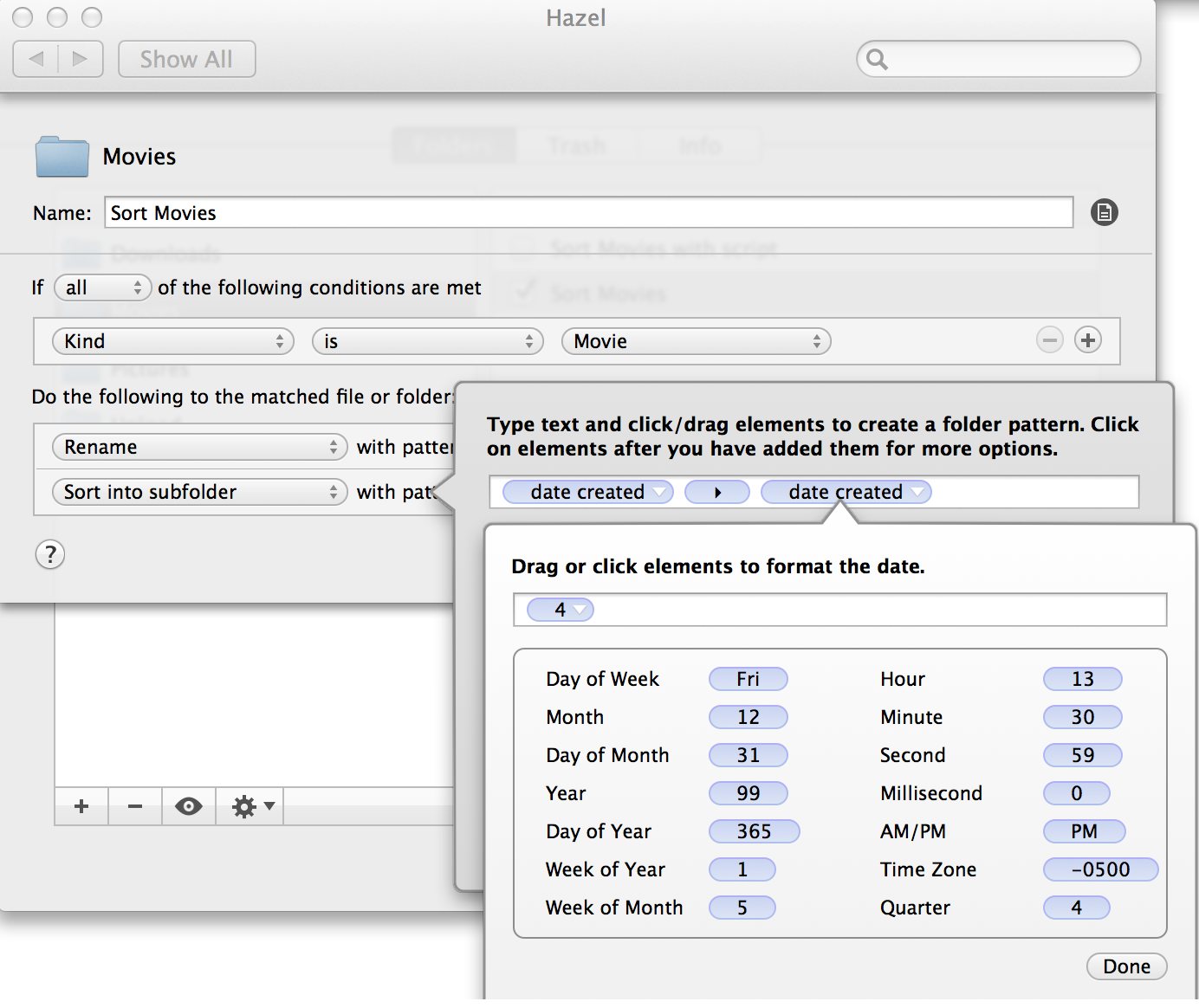 Once Hazel is done doing its magic, I get a nice and tidy folder that looks like this: 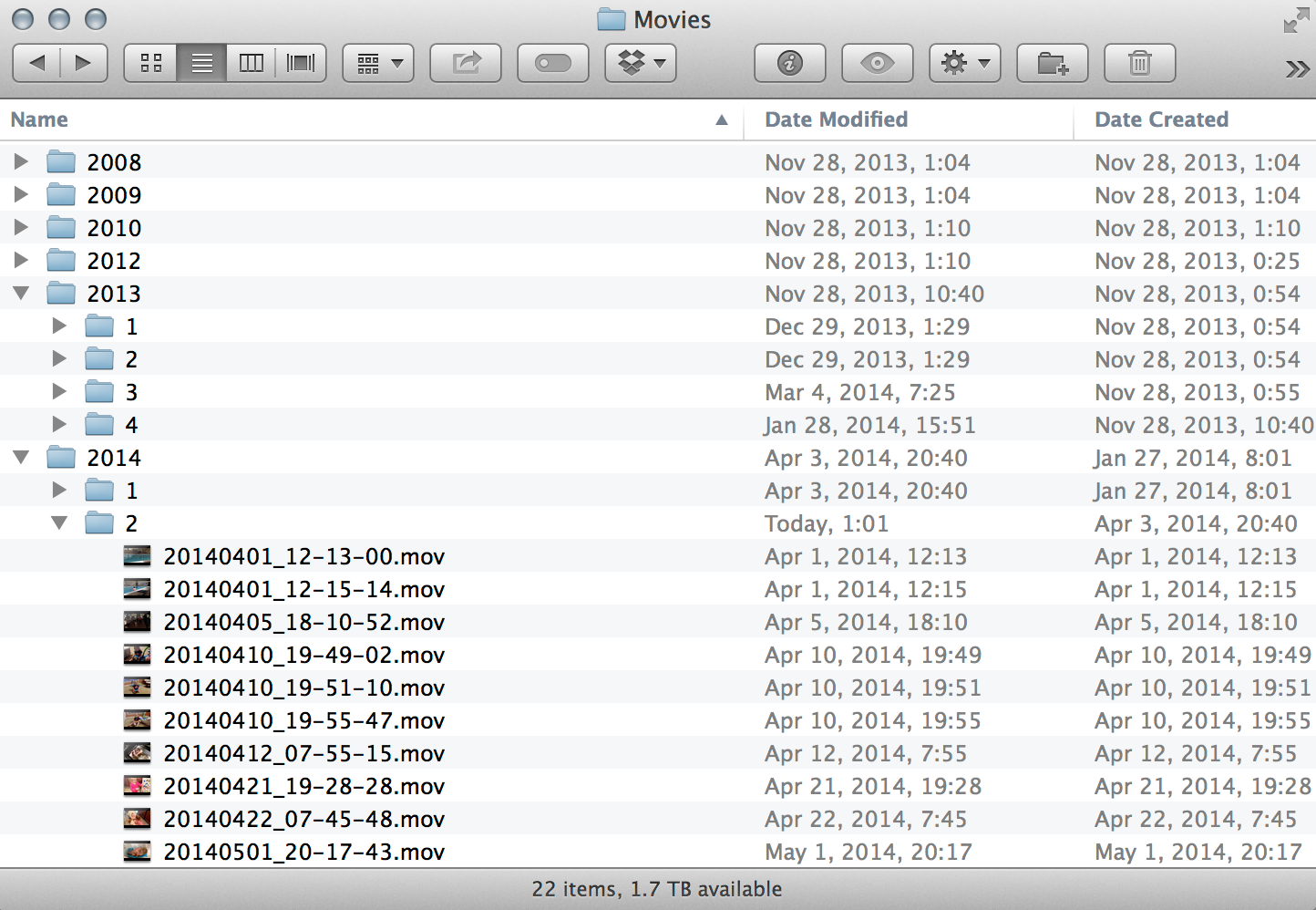 Now that I have these great videos neatly organized and stored on my home computer, how do I share them with friends and family when I’m out and about? Currently I’m using Plex Media Server with Plex for iOS to stream it directly to my iPhone. Plex running on my iMac will transcode the video on the fly to a smaller file size so that it can stream at a reasonable rate. I can then use AirPlay to share it to a TV if there is one available, or just view it directly on the device. The quality is lower than if I was playing the file directly from my device, but the ability to access my entire video library anywhere is worth the trade off.

I’m not crazy about this current setup — though it does work, my iMac is a 2007 vintage and works rather hard to dynamically transcode 1080p footage. Plus, having to leave my home computer on 24/7 simply because I may want to stream a video is not ideal either. Long term, I’d like to solve this problem with a Synology DiskStation and run Plex there or use DS video.

A Brief Note About Backups

A detailed description of my backup plan is a topic for another day. Briefly, my movies and pictures are copied to the internal drive of my iMac, backed up to Time Machine, Backblaze, and another drive using my rsync-time-machine script that gets rotated off-site on a weekly basis. Three copies of my precious data in three different places. This may sound a bit paranoid, but last September I came home to my iMac and all its backup drives covered in water. No one is immune to the unexpected.