I’ve been thinking quite a bit lately about how I organize my photos and, more recently, videos. I developed a system when I purchased my first camera in June of 2005: a Canon 20D with the 17-85mm ƒ:4.5-5.6 IS USM lens for $1779 (it’s crazy to think about the camera I could get today with that amount of money). The system seemed good enough at the time and it worked well for a number of years — but I have since found that the joy of capturing and creating images was completely taken away by the system I created. Fraser Speirs said it best:

I miss DSLR photography but I don’t miss DSLRs much. The megapixel race turned photography into a sysadmin job :-(

Since I am detailed-oriented by nature and a system administrator by trade, I naturally approached the problem of how I would shoot my images based on how those images would be stored. I didn’t want to take a picture if I didn’t already have a folder in mind for it on disk somewhere.

While it is important to keep a somewhat organized library of content, I had allowed my organizational system to have far too much influence on the fun of making pictures. As a result, I came to dread picking up the camera. I created such an unwieldy system that photography was no longer fun.

My original organizational system centered around the notion of an “Event”1 inside the framework of time. I used (and still use) Aperture, so each project was an Event2. The projects were contained in folders using the scheme YYYY > MM > DD [Event]. I named the image files YYYYMMDD_#### based on the capture date. It looked something like this: 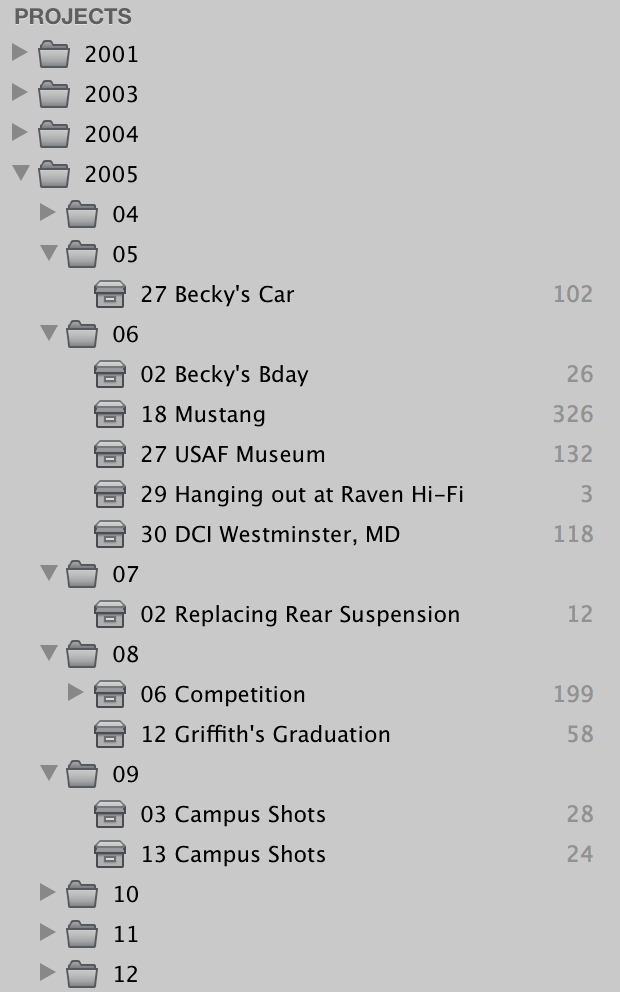 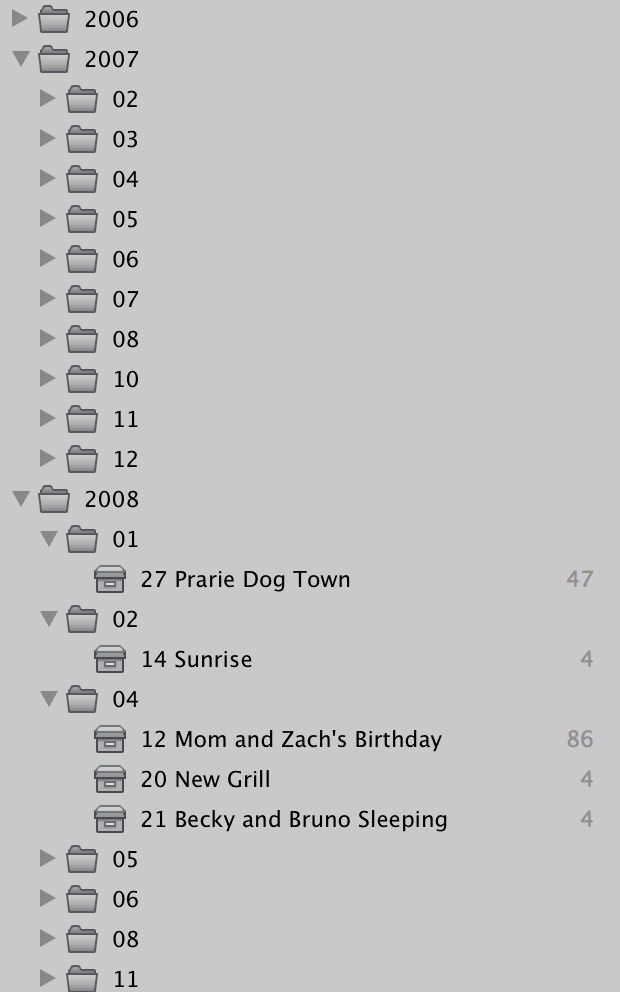 Looking back, several problems became quite evident. First, it’s incredibly difficult to find projects buried two layers deep across dozens of folders. Aperture’s very powerful search helps alleviate this, but finding things buried in this hierarchy was still a pain. Second, and most important, is that I have several events with only a handful of pictures, most of which are just snapshots not really worthy of an event. Naming an event full of random snapshots is a rather comical exercise as you can tell from some of the event names. This system clearly did not scale well and was in direct conflict with how I wanted to photograph.

For a long time, I resisted the idea of a photo stream. This concept was popularized by Flickr but never appealed to me because it seemed to lack enough structure. With the proliferation of high-quality phone cameras, it’s impossible not to adopt the notion of a photo stream. I love the images my wife and I capture with our amazing pocket cameras, but it’s quite a challenge to keep the fire hose of pictures from getting out of control. With Photo Stream in iOS, Apple put some effort into keeping things tidy, but it’s far from a perfect solution. 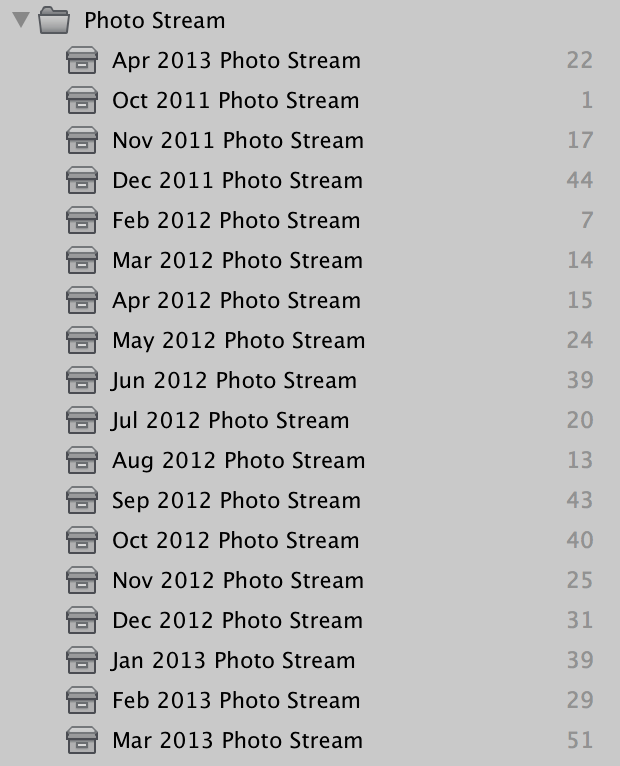 My new and improved system

I think of my new organizational system as a Hybrid Photostream. This method was influenced quite a bit by my friend Mark who is also an avid photographer and Aperture user3. The gist of it is quite simple and liberating: actual events such as vacations, major holidays, birthdays, etc., get an event container (a project in the Aperture ethos) and everything else goes into a Snapshots project for that year. I use Smart Albums (one of my favorite things in Aperture) to break the year up into quarters. Here’s what it looks like: 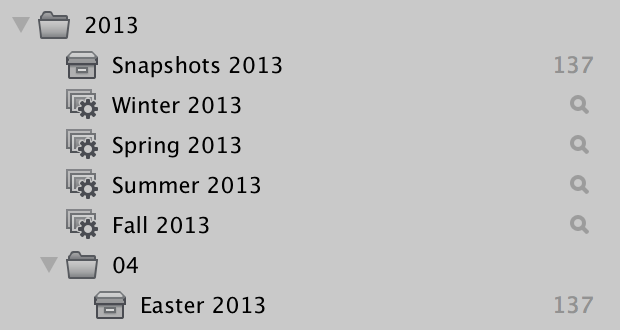 Here is how I define the quarters:

To create the Smart Albums, I use the Calendar rule and Shift + Click the date range I want (Aperture conveniently displays three months at a time, making this quite easy). I also set the source to the 2013 folder so all pictures from that year will show up in the smart albums (more on why in a bit).

The seasonal divisions aren’t completely perfect, but they are close enough to give the desired effect. When I look at Winter, I see pictures of snow. Summer and Spring show outside sunny pictures. Fall is pretty leaves. You get the idea.

The Snapshots project contains pictures from my iPhone as well as pictures I shot with my SLR. I have automatic Photo Stream importing enabled, so Aperture creates projects named MMM YYYY Photo Stream where it puts all the pictures I take with my iPhone. I leave this project alone until the next month (it continues to collect images shot with my iPhone throughout the current month), at which point I decide which images are worth keeping, tag them, and move those to the Snapshots project.

The end results of this system are that I shoot more photos with less guilt (I have a catch-all project named Snapshots), there are far fewer folders and projects to sift through, and publishing my photos is greatly simplified. I may even be able to eliminate the need for month folders simply because the number of events I create in a year is now drastically reduced.

I host my pictures on SmugMug for friends and family to enjoy (Facebook’s terms of service are much too onerous and creepy). Part of rethinking my library organization method also included rethinking how I organize my photos on SmugMug. I originally intended the publishing structure to mimic the library structure, i.e., an event in the library would be published to a corresponding event on SmugMug; this really did not scale.

The reason the seasonal smart albums include all photos from the year folder and not just the Snapshots project is because that is how my photos are published. There are five galleries per year: Winter, Spring, Summer, Fall and Videos4. This also makes the URLs look nice, e.g., photos.samdoran.com/2012/Fall.

Galleries are sorted in date descending order, so the most recent images are on top. All my photos are tagged with people and events. Since SmugMug has a great interface for taking advantage of tags, it is really easy to find pictures of a certain person or event.

I also publish some photos in Albums. These are collections of photos that tell a story that can span any period of time and are arranged in date ascending order. I don’t have many albums (one as of this writing), but I will have more in the future.

How I organize video

I was never really in to capturing video before I had a kid. Now, my wife and I film constantly because our daughter is hilarious and we want to capture all those moments before they are gone.

I use Final Cut Pro X to organize our footage. My wife and I both import into the same Final Cut Events folder so we have one library with all our video content (we maintain separate photo libraries). The overwhelming majority, if not all, of our footage could be classified as “snapshots”. We don’t really film events, we just capture moments. For this reason, video organization is quite a bit simpler.

I have four events (those are the containers used in FCPX) per year where our footage is stored: Winter, Spring, Summer, and Fall. The clips get named using the capture date and clip length automatically when importing into FCPX, which I like. If I ever want to pull my original footage out of FCPX, the files are neatly named and organized on disk.

Final Cut Pro has a wonderful feature that will automatically group events by year or year and month. This automatically creates the structure I have been manually creating in Aperture for years. I really hope this makes its way over to Aperture 4.